« Looking forward, looking back — thanks to all who made the Timberland series possible!
Hypatia Friends Present Neglected Olympia History »

Reminder: Musicians are more than welcome at Holly House

So, have you heard of Radioqualia? Fever Ray? Pussy Riot? These are the artists who have caught my attention lately. Thought I’d share them with you.

Radioqualia describe themselves as “radio artists” – “an art collaboration by New Zealanders, Adam Hyde and Honor Harger, founded in 1998 in Australia … [they] create broadcasts, installations, performances and online artworks. [Give a listen to one example here.] Their principal interest is how broadcasting technologies can be used to create new artistic forms, and how sound art can be used to illuminate abstract ideas” (more on Wikipedia).

The piece I happened upon is “Radio Astronomy,” which was awarded a UNESCO Digital Art Prize in 2004. “Radio Astronomy” is a collaboration between Radioqualia and radio telescopes around the world.  This project, that is both art and science, broadcasts audio from the cosmos.  I found them in the Huffington Post’s TED Talks “Tuning Into the Universe.”   If you want to listen, follow the links through the TED Talks post; the ones on the Radioqualia site seem not to be working, at least this morning. 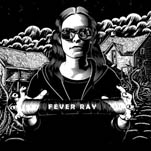 From the cosmos to Sweden and Fever Ray, (Karin Dreijer Andersson). I love the moody, rhythmic sound and the stark commentary of her music. “Keep the Streets Empty for Me” was my introduction. There’s much more available on Youtube.

And then there’s Pussy Riot, a Russian feminist punk rock collective whose imprisonment reminds us of the power of music as protest. A documentary 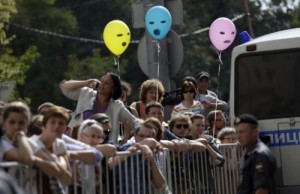 Supporters of Pussy Riot outside a court in Moscow, August 17, 2012. (AP Photo/Sergey Ponomarev)

about their protest and subsequent trial debuted at Sundance in January of this year. You can see the offending performance here. A petition on their behalf is floating around on the internet looking for signatures.

Interesting, that among the video supporters of the petition is The Knife, the duo that Fever Ray is half of.  Ah, the connections that the internet makes possible!

With all of this as inspiration, do introduce your women musician friends to Hypatia-in-the-Woods.  Holly House could be just the place to create new music!  And fill your days with music!

This entry was posted by Guest Voice on February 23, 2013 at 9:13 am, and is filed under Musings. Follow any responses to this post through RSS 2.0.Both comments and pings are currently closed.