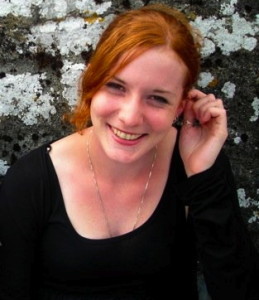 Was your residency what you expected?
Holly House is in a beautiful place, far away from Seattle where I live. I was surprised by how quickly I was able to forget everything that was going on in Seattle and start writing. I thought it would take a longer. Being on my own in a different environment worked for me.

Did you learn anything about yourself?
In addition to being a good time to write, it gave me time to think about the past year. I worked in a middle school in a high poverty neighborhood. There was a lot I had not reflected on and I was surprised that came out when I was writing. It gave me time to think about relationships and how they have been going. I am working on a novel. It is about family relationships and these definitely came out as I was writing, too. It was nice to remember that when I sit down I can be committed to something. I haven’t had the time to write and keep writing for awhile.

Why did you apply to Hypatia-in-the-Woods?
I also write poetry. Writing a novel… it’s totally new to me and I honestly don’t know how to do it. I had time to figure out what to do. I felt like having specific sets of time to write and being far away from other critics and my inner critic. Also, I wanted to stay in the Pacific Northwest. I hike and enjoy being close to nature.

How did you find out about Hypatia-in-the-Woods?
Through a friend who was also a co-worker. We both worked in a psychiatric hospital for kids, teaching them to write poetry. I still volunteer for that organization and now work in juvenile detention. The psych leader at the hospital was working on a play and researched different places to work on the final draft. She went to Hypatia.

What place in Holly House did you gravitate to?
The kitchen table. I cleared it off so it was just a table and a few chairs. I like open spaces to work. It gave me enough space to not feel cramped. I like to feel awake at working. When I am near my bed, I find I am less productive.

Do you have a favorite place on the grounds?
I ate outside most days. Sitting on the back porch allowed me to look out at the trees. I noticed all the things that you don’t notice when you pass by a tree.

I explored more of the nearby Shelton area than the Hypatia grounds. I really liked Walker Point Beach and explored the forests in Lilliwaup and Twanoh State Parks.

What were the sights, sounds or smells on the grounds that inspired you?
I was stuck on what was going to happen with two characters. I had them on the road, which is a hard place –a static place – to have interaction with each other. I decided that they would be in a cabin in Alaska, which ended up looking a lot like Holly House. Because I was at Hypatia, I was able to tweak what it was like to be in a forest. I was able to see the water in front of Holly House. I also live close to the water and can imagine that setting. Being able to glimpse water has always been inspirational for me.

You stayed at Hypatia-in-the-Woods for almost a week. Was that the right amount of time?
I think it would be interesting to try a month or two. I was in between jobs and starting a new one the next week. If I knew in advance that I had a stretch of time when I didn’t need to work, it would be great to have a month. Getting into the project and resurfacing would be much different. It would be more leisurely and at times I would get more done.

What were you most happy to accomplish at Hypatia?
I was just happy to be able to write freely and in a larger quantity than usual. I tend to be the type that goes through drafts in my head and not writing anything until it’s further along, which I don’t recommend to anybody. It was nice to write and know that I can revise this when I’m done here. No one will see this. It’s good to have fifty pages of incohesive words compared to bits and pieces all over the place.

What was different about what you hoped to accomplish and what you actually accomplished?
It would have been nice to get more done. I spent the mornings working and the afternoons reading or going on a drive. Sometimes I would work a little in the evenings. It would have been great to work with breaks each day for a few days. I could have gotten to a different part of the novel that I haven’t written much on. Coming straight out of a rather hectic job, it was too hard to be too strict with myself.

In general, what influences your work?
Everything I experience and see, but that is too general. Definitely relationships, family and places that have been important to me. My current writing is set in Belfast, in Northern Ireland, where I lived for awhile. It’s inspirational, maybe partially because I still want to be there. In some ways, the kids that I work with – they never come out directly in what I write, but I know that they must. I see little hints in how I create characters and the things they have trouble with.

What inspired your work the most during your stay?
I think partially a book that I was reading. It enabled me to get out of my head enough to be somewhere else. It was set in Dublin and I think that it was helpful because it was closer to the place that I was trying to write about. But it was also nice to have something enjoyable to read, a little bit of escape. It enabled me to look at more of where I was. I think the house itself was inspiring. That may be opposite of what you are supposed to say when you are in nature. Holly House is beautiful and the wooden beam in the middle of the ceiling popped up in my story.

When you look back on your experience at Hypatia-in-the-Woods, what memory do you want to keep?
I worked one morning and then went into Shelton for blackberry pie. I had coffee with Marilyn (Hypatia volunteer), which was very nice. On the way back I stopped at Walker Point Park and went swimming. I used to have the habit of whenever having the urge –when I was near a body of water that wasn’t too dangerous – to go swimming. For the past couple of years, I haven’t wanted that as much. It was good to be able to want that again. It’s seems rather metaphorical. I can’t articulate – sitting on the beach, reading poetry and I just wanted to jump into the water. It’s freeing to want to jump into the water.

What was the one thing that you wished you had brought that you left at home?
Fortunately there were a lot of poetry books at Holly House. That made up for the fact that I didn’t bring enough of my favorite poets with me. Because I was working on a novel, I just brought a bunch of novels and only read one in its entirety. I teach poetry for nine months out of the year and write poetry while I am working with the kids. It’s a way of processing it. When I am done with that project, I tend to stop writing poetry, which is a sad habit.

What was one thing that you brought that you wished you had left at home?
Ideally, if I were coming from a different place I would not have brought my computer. I didn’t end up typing anything. I handwrote everything. But, I used my computer to watch movies at night and to play music. I think if it was a longer stretch of time and if I hadn’t just transitioned out of this job, I would have wanted it to be more technologically free.

What would you most like to hear people say about the work that you accomplished at Hypatia?
That’s a hard question. My partner seems to be my first reader. He is uncritical of the scope of what I am doing but can be critical of the specifics and will tell me when I am not being authentic and not writing truthfully. I am imaging him being the first reader and thinking that I let my voice take over and was freer with what I needed to tell.

It’s definitely a first draft and needs to be more poetic in a lot of ways.

What three words would best describe your experience at Hypatia?
One would be balance. I was on my own and had so much time that I was able to be more mindful – eating really well, enjoying the process of even making coffee, getting to do yoga, swimming a little, while also writing and reading.

There was some amount of seclusion. I was technically fairly close to some houses, but did not know anyone in the area. I felt further away at night. It impacted what I wrote.

And then, structure. When I thought that I might not be going on the residency, it was more terrifying that being out in the woods and being forced to write for a week. Structure shaped my time for a week and allowed me to do what I love to do.

What advice would you offer to women thinking about applying for a residency?
For me, going in knowing what I wanted to do was helpful. But, I also read the diary/day book of past residents and found many just seized the time and found a lot of inspiration. I don’t know what they ended up creating but it sounded as if they gathered a lot of material. It depends on where you are in writing and in your life.

Anything I didn’t ask that you would like to comment on?
I was really impressed with how welcoming and friendly everyone was on the first day and then how they arranged to meet for coffee during the middle of the week. As if they anticipated that I would need that. Before, if I needed a residency, I would go to a hostel and you do not get that sense of community.