« The Next Poetry Broadside is Underway
Elspeth, Elvis and the Seattle World’s Fair »

Pat’s post about Hypatia’s 2nd broadside reminded me that I’d written about the first back in March, back before the new web was live. This is old news by now — we’ve sent out many of the first printing as membership premiums and, as Pat wrote, are well started on the second, but the beginning, the first turn of the press, was so much fun, I just have to share this.

March 11, 2012: The press clacked and sighed as Pat turned the handle, then was quiet while I picked each newly printed broadside from the cylinder. Crisp letters on fine, muted papers. Four of us were printing broadsides, the poem “Swallowing the World” by local poet Don Freas. Probably a hundred repetitions for the seventy-four good copies printed. The others were proofs: determining placement on the page, realigning the plate after we cleaned the bed, checking the inking.

Helen and Pat and Elspeth and I will gather in the print shop again in a week or so to send each page through the press a second time for the illustration. The signed, limited edition broadside will be our 2012 membership gift for new and renewing members.

Taking part in the process, determining just where on the page the weight of the poem should be placed to balance the fine lines of the illustration, of figuring out how to adjust the rollers of the old Vandercook to make the impression even throughout and which set screws to tighten and when more ink was needed, was an amazing experience.

But we were watched over, coached and patiently helped by our letterpress guru, Elspeth, which meant we learned 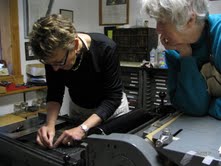 Getting it just right

from it rather than simply being frustrated by the quirks of the press. And there was a lovely potluck dinner that broke up the afternoon-turned-evening of print shop work–scrumptious Bean Pebble Paella, bountiful salad, homemade bread, and festive dessert cheeses.

In addition to being a long-time friend of Hypatia-in-the-Woods and a fine poet, Don, the poet of the broadside, is also an artist. One of his pieces, “Ring Dance“, is among the 15 works that will be on exhibit as part of the Percival Plinth Project in Olympia. I do hope you’ll walk the boardwalk and enjoy the art work: And do consider a new or renewed membership in Hypatia-in-the-Woods. I know you will enjoy having one of our broadsides as much as we have been enjoying planning and printing them.

This entry was posted by Guest Voice on July 14, 2012 at 8:31 am, and is filed under Membership, Pressing Matters. Follow any responses to this post through RSS 2.0.Both comments and pings are currently closed.