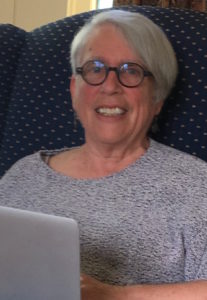 A former newspaper reporter and editor, Carolyn earned her Master of Arts degree through the McGregor School of Antioch University.  A published poet, she teaches creative writing at Olympic College Shelton.  She and Elspeth Pope produced her letterpress chapbook, Voluntary on a Flight of Angels, at Hypatia-in-the-Woods Press. She has written two books of local history and is finishing her first murder mystery.

Colleen received her BS degree in nursing from the California State University at Long Beach, and worked as a public health nurse and as Supervising Public Health Nurse for Orange County.  She retired in 1992, moved to the Pacific Northwest, became a Master Gardener, and divides her busy schedule between her large garden, being active in various community cultural organizations, and serving as treasurer of Hypatia-in-the-Woods.

Allen is the founder and manager of a small electronics company in Shelton. He says he is an engineer by profession and a humanitarian by choice. and he adds his prudent, businesslike approach to Hypatia affairs. He has been a board member of the Economic Development Council of Mason County and he is the local chapter leader of The Compassionate Friends, a worldwide support organization for parents who have lost children.

Untiring in her goal of introducing Hypatia-in-the-Woods to people of all ages, cultures, and classes, Vivian Bliss brings wide experience with social networking and information technology to the Board of Directors. Originally from Kansas, Vivian moved to Washington State in 1997 to work for Microsoft.  She now works as an information science consultant and studies food & wine pairing.

Allan retired from work as a county land use planner after 25 years of service.  He has been an advocate for women in the arts, has been a board member of Hypatia-in-the-Woods since mid-2014, and continues to support the maintenance of the Holly House as a safe and quiet place for creativity. 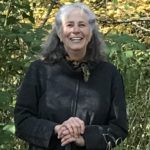 Shelley Spalding is a retired fish biologist who spoke for the beautiful and voracious bull trout in negotiations for state forest practice rules, tri-state water quality rules, recovery planning and critical habitat.  Prior to becoming a fish biologist, Shelley taught in a one-room school, built a log house, assisted a traveling veterinarian, and curated a traveling natural history museum.  Recently she transitioned from playing hammer dulcimer to learning the mountain dulcimer.  She also weaves with native fibers such as cedar bark, sweet grass, and bear grass.  Shelley lives on Decker Creek, a salmon stream on the Olympic Peninsula and is Capital Land Trust Steward for the 550 acre Decker Creek wetlands complex 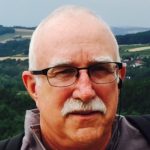 Bob is a former Naval officer and Sr. Lecturer Emeritus in the Department of Neurobiology, Physiology and Behavior at the University of California, Davis.  His research interests were in the health benefits of physical activity and fitness.  He is a Fellow of the American College of Sports Medicine and the elder son of Jim Holly. 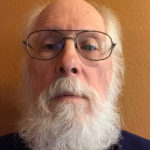 Larye retired from a career as system administrator and software engineer, serving in that capacity at the National Institutes of Health, the University of Montana, the U.S. Army Corps of Engineers, and several other companies and agencies, following a first career as a systems engineer with Unisys. He also served as adjunct assistant professor of computer science at Chapman University, Silverdale Campus. He continues to serve various organizations’ information technology needs in an advisory volunteer capacity: several fiber arts guilds, Friends of the Library, and Hypatia-in-the-Woods, and frequently provides computer programming and system solutions advice in an on-line technical forum

Judy is a retired registered nurse and former longarm quilt artist. She now focuses on beadwork, making art journals, weaving, spinning, and other fiber arts, and has served as program and workshop chair in her weaving guilds, and is active in several other community organizations. Judy and husband Larye are avid tandem bicyclists.