« As Days Get Longer …
Reminder: Musicians are more than welcome at Holly House »

Looking forward, looking back — thanks to all who made the Timberland series possible!

As applications for residencies in Holly House for 2013 come in, we begin conversations with these women about sharing their work with our local community. Hypatia is pleased to partner again with the Shelton Timberland Regional Library which hosts readings, workshops, and performances by our residents. We don’t know yet what all the second year of the program might hold — basketry, oil painting, and memoir writing are being planned thus far — but I want to take a moment in this blog to thank again the residents of 2012 who made our first year’s partnership with the library so much fun.  Here’s a recap of the last season; we’ll post news of upcoming events as details are worked out. Hope to see you at the Library! 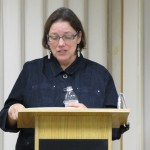 Ruby Murray reading from her work.

Ruby Hansen Murray initiated the Timberland series (and yes, it was 2011, but December, so almost 2012) with an afternoon discussion of researching and telling family stories and reading from The Heart Stays People, the story of an Osage Indian girl who is captured and must find her way home in 1820’s Arkansas.  Since her reading the book received First Place in the Historical Novel category of the 2012 OWFI Annual Writing Content.  Congratulations and thank you for sharing, Ruby! Do I remember your saying you’ve finished it?

Margaret “Maggie” Chula returned to Hypatia-in-the-Woods in June 2012 to present workshop on haiku, a bright summer morning spent writing and wandering the grounds, as well as a reading at the library from What Remains, her newest book and discussing of her life in Japan for 12 years. Maggie shares some of her poems on her website. 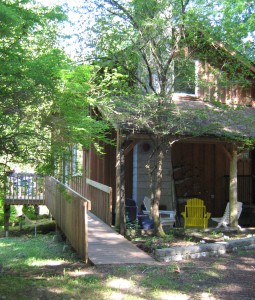 In July Sidney Brammer extended her final residency for an MFA from Pacific Lutheran University with a residency at Holly House, and read from her novel Blue Norther. Five pages of a synopsis and an evening of reading weren’t nearly enough; we wait eagerly for its publication. A bit of background: the novel borrows its title from the name of a weather phenomenon. 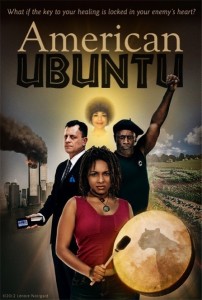 Poster for the movie written by Lenore Norrgard

And in August Lenore Norregard read from her screenplay American Ubuntu. She ran a successful Kickstarter campaign in late 2012 to bring it to the screen. In both video and written text, her Kickstarter page tells a wonderful story about the journey.  Norregard says on Facebook: “Posters in production, check. Mailing tubes, check. Address labels, check. Music download cards, check. Envelopes, check. BUMPER STICKERS? oh, geez… I really, REALLY want to ship the rewards before I go to LA next week…”  Congratulations Lenore! 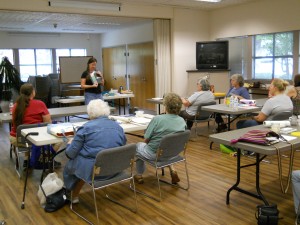 September saw two workshops — firsts in what had previously been a series of readings.

Abigail Vaughan brought an afternoon of watercolor illustration turning the reading space into a hands-on workshop.

Traci Schatz continued the trend by conducting a workshop in writing to connect with the self. Both were packed and most appreciated by participants. 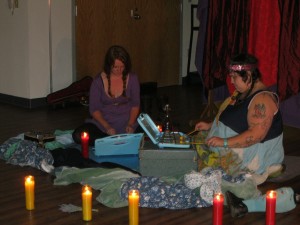 The final presentation of the season was another first as ((Double Hug)), Nomy Lamm and Erin Daly, presented music they’d collaborated on during their stay at Hypatia and earlier. They recorded a CD while with us, “Sustenance: Songs & Spells for Decolonizing Bodies.” I don’t know if copies are still available, but you can contact Nomy.

This entry was posted by Guest Voice on January 30, 2013 at 10:02 am, and is filed under Events, People of Hypatia, Residents. Follow any responses to this post through RSS 2.0.Both comments and pings are currently closed.