« Elspeth, Elvis and the Seattle World’s Fair
As Days Get Longer … »

Looking toward next year’s alum gathering …

As I drove the last of the Hypatia resident alums to leave this week’s gathering back to Olympia to catch the Amtrak for Seattle, we chatted about this year’s gathering and looked toward next. The sheltering cedars at Holly House had made even the almost-record high temperatures bearable. Lenore read Thursday evening at the Shelton Timberland Library from her screenplay American Ubuntu. We got just a taste of it — just enough that all of us are looking forward to seeing the entire story play out in movie form. Then Saturday was lunch with all the alums, and afterward they shared bits of their work: Ann’s poems, some of the backstory from Lenore’s screenplay, and stories related to the book Ruby is at the editing stage of — the book she worked on and read from while a resident herself. The gathering thus over, we look forward to having these and other alums return next August. 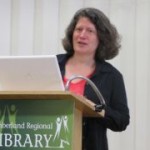 This entry was posted by Guest Voice on August 20, 2012 at 10:43 am, and is filed under Events, People of Hypatia. Follow any responses to this post through RSS 2.0.Both comments and pings are currently closed.