The Café intermezzo, Rita Mae Brown at Evergreen as the Vietnam War ended, Lily Tomlin in Olympia for the 1984 Olympics Women’s Marathon Trials, the 1976 Women’s Music Festival in Olympia produced by Tides of Change, The Janes of All Trades, and much more … local history to revel in! 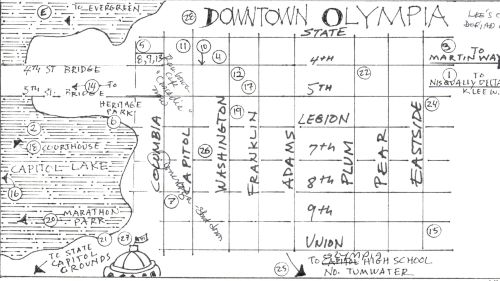 Elspeth and I were in Olympia a couple of days ago for the first SAGE Salon, a presentation by Llyn De Danaan and Carol McKinley, two great, long-time friends and supporters of Hypatia-in-the-Woods. They opened with a discussion of the project they’re just finishing up, “Olympia Gay/Lesbian History Walking Tour” and then invited discussion and questions from the audience, a group of perhaps 30 friends, faculty and students. “Finishing up” though, may not be the best way to put it. Both presenters emphasized that this work is a beginning, a seed project looking, as they said, for someone to take it forward. And as Anna Schlect of SAGE said, someone should have fun with this project! “It was fun living it — sometimes life-threatening — but we had fun!” 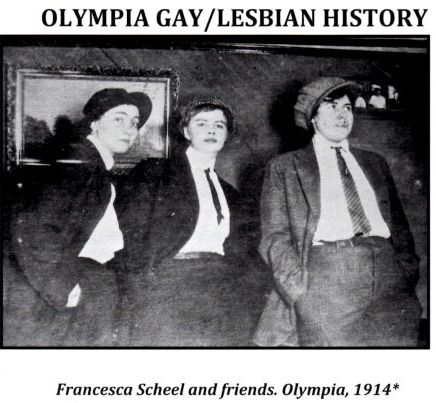 Share the celebration of this neglected piece of Olympia’s history on the project’s Facebook Page.  See the broadside they’ve produced: Historic Highlights of Olympia Lesbian Gay History.  (Llyn is an anthropologist and author; some of her other work is here. And a bit from Carol, who is a Unitarian minister, here.) Thanks Llyn and Carol and SAGE!

This entry was posted by Guest Voice on March 17, 2013 at 10:05 am, and is filed under Events, People of Hypatia. Follow any responses to this post through RSS 2.0.Both comments and pings are currently closed.